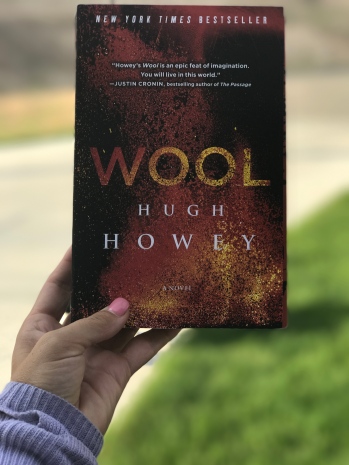 So I found this book listed on some internet list of the top books you should read.  You really shouldn’t read this one.  It wasn’t the worst book I’ve ever read, (see Night Film review), but I had to force myself to finish it.

The main problem for me, at least, is that it’s YA (Young Adult).  The YA audience is hot right now, but I really don’t like it.  YA is written for young teens, approximately 12-18, although that number can fluctuate depending on content and theming.  Every reader has genres they enjoy reading and others they hate, and YA in general is one I hate (notable exceptions are Harry Potter and Hunger Games.  However, it took me a VERY long time and A LOT of recommendations from others to even pick those up.  I started Harry Potter after book 4 was released, and Hunger Games after the movie was released. Of course I read the book before watching the movie!)

Being that Wool is a YA novel, the language is far more simplistic and basic than I am usually used to.  The book was boring, I didn’t particularly care for the characters or what happened to them, or what the outcome was.  There are two other books in the series, and I didn’t care to read them.

The basic story takes place in a dystopian world, with an incredibly large silo (yes, silo), that houses hundreds of people.  Everyone has a job, everyone has work, and they live very isolated lives.  If someone wants to leave, they are forced outside, where they are taught that the air is toxic.  But is it?  And are they really alone?  Is there really only one silo?

Maybe if I was in the right audience, it would have worked.  But I didn’t care for it much, nor did I care to find out more of what happened.

This is a text widget, which allows you to add text or HTML to your sidebar. You can use them to display text, links, images, HTML, or a combination of these. Edit them in the Widget section of the Customizer.